First Violin - An Octave of Prints

As my homage to Darwin, I submerged an unfinished violin in wet clay. Over time, as the clay dried and shrank away, the violin gradually emerged as if it was the first of its species to appear on the surface of a still-forming planet. Click on the photo to see a gallery of the process.

When I removed the dried clays from the trays in the installation “Changing States,” I discovered that each clay left its own distinctive pattern of marks on the linings of the trays. I removed sections of these patterns to preserve as digital fine art prints. Revealing the rarely-noticed patterns that clays assume is a major focus of my work.

I poured pure liquid porcelain into segments of a grid. While most clay traces bear some similarity to one another, those left behind by the porcelain differed entirely from any I had seen before. 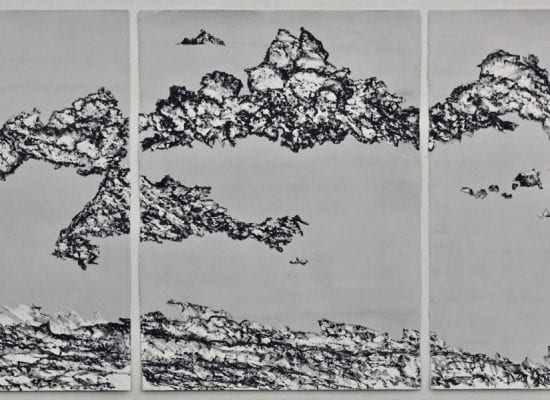 I stretched multiple sheets of paper across a rock formation on the coast of Ipswich Bay in Gloucester, Massachusetts. Using a plumber’s marking pen, I transferred the image of the rock onto the papers. Some are direct prints, others are collaged.